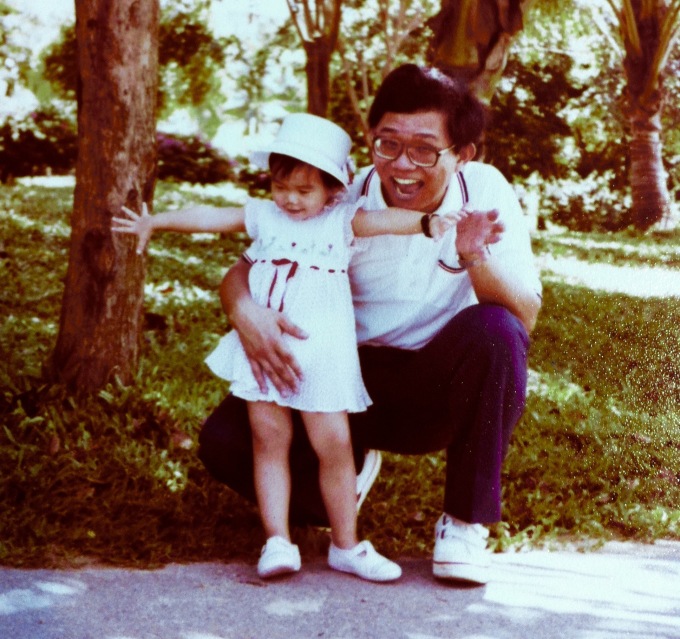 As far back as I can remember, I was never a “Daddy’s Girl”. My father’s not the sort of Dad that likes to indulge or pamper his “little princess”. In fact, what I remembered most about my father when I was a child was that he worked a lot. He had a hearty laugh and enjoyed a good joke (and would allow his cheeky little daughter to tease him and call him funny pet names), but he could also be very stern, and I was terrified of him whenever he got angry. Neither of my parents ever used corporal punishment on their children, but my father had a really loud voice and a wicked glower – neither of which he ever hesitated to use to show his displeasure. I remember that when I was little, my poor little heart would sink to my feet and I would feel cold all over when I could sense that Daddy was getting angry at me. More than anything I wished he would just hug me and let me cry, but my typically Asian father isn’t the touchy-feely sort. I do remember that there were times when he would apologise to me for losing his temper after having given me a huge dressing down. I was grateful for that, but as I grew into my teenage years, we grew further apart, and I learned that avoiding my father was the best way to avoid getting him or myself upset with each other.

Every family has their crosses to bear and mine is no different. I have always been easily wounded, and there were many things that my Dad did or said that hurt and angered me without him knowing. And I was too terrified of being hurt further to want to tell him how I felt. There was a huge span of time in my life when I was a terrible daughter to my father – hostile, cold, defensive, angry. I resented so many things about him that it took two miracles of grace – the first when I was 18 years old (in Lourdes), and the second when I was 30 years old – to open my heart to this relationship again.

The grace I received at 18 was the realisation that Christ knows all the hurts I have borne from my Dad and He had paid for all my father’s sins on the cross, too. I “saw” Jesus on the cross, with his blood dripping on to my father, as He asked me, “I know you find it hard to forgive him even for your own sake. But will you forgive him, for my sake?” In an instant, my rock-hard heart yielded and the years of calcified resentment miraculously disappeared. The healing was tremendous, but I still could not say I was able to love my father.

The year I turned 30, I felt God invite me to bring my relationship with my Dad to Him for healing. Somehow, I said “yes”. Then came a day when I felt prompted to write my father a letter. Tears poured down my face as I found myself writing a letter I never thought I would ever write – it was a letter asking my father for forgiveness, apologising for the fact that I never gave him a chance to be my father. For the first time in my life I saw what it must have been like in my father’s shoes, and how hurt he must have been by my coldness and anger. In that instant, I knew that God had given me the grace to forgive my father for all the wounds that I had felt he inflicted upon me. Gone was the indifference in my heart, and now was born a new hope. I ended that letter to my father by asking him for a second chance… for us to become father and daughter once again.

It has been more than 6 years since that fateful miracle of grace. The pace has been slow and stately, but I know God continues to heal me and my father. As we both progress in our own relationship with Christ, we continue to become new persons, and our once tense and uncomfortable relationship has now actually become enjoyable.

As my acceptance and love for myself grew, I became more aware of just how much I have taken after my father. My fiery, passionate temperament; my animated vivaciousness; my loud and energetic expressiveness; my knack for becoming oblivious to everything else when I am absorbed in something; even my clumsiness and lack of sensitivity at times to others. All are just like Daddy. Just the other day, when I was sitting across from him, I noticed for the first time that his glasses were a little lop-sided – just like mine!

This Father’s Day, I am so grateful to my Heavenly Father for loving me into wholeness and restoring my faith in his Fatherhood. I thank Jesus Christ for pouring his love into my heart, healing me of my distorted images of God and self, so that I can begin to see my earthly father as God sees him. And I am indebted to the Holy Spirit for giving me the power to forgive and love in ways that for me are impossible.

Finally, to my father, I just want to say – Daddy, I love you. I am proud to be your daughter, and I am very happy to bear the imprint of your trademark genes. I look forward to learning more about life and love together with you, and becoming more your daughter every day. Happy Father’s Day!