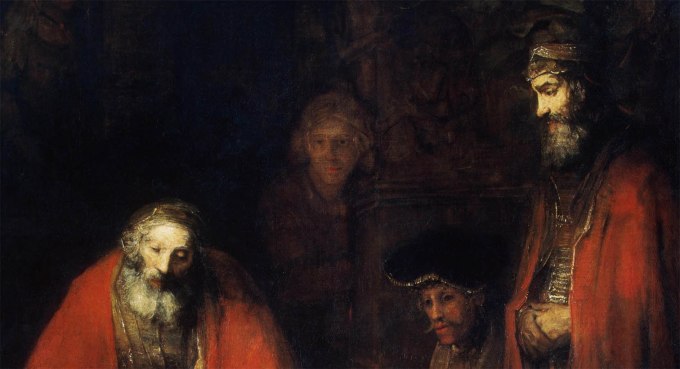 Rembrandt’s “The Return of the Prodigal Son”

I read an interesting piece this morning titled “What if the Prodigal Son met the Older Brother First?” In it, the author shares a reflection about how “prodigal sons” seeking to return to the Father often never make it back home (to the Church) when they encounter the self-righteous, unwelcoming elder brother first. It is a very valid point indeed, but I wish to add to that conversation by noting that those who are like the elder brother can’t simply choose to be loving and welcoming to the prodigal son. The resentment, anger, and injustice that they feel at the Father’s response to the younger son are symptoms of the hurt they have borne all their lives in the Father’s House. If we wish for the elder brother to become welcoming and forgiving, then we must first tend to his wound.

The elder son never left the Father’s house, but he had never experienced his sonship either. For whatever reason, he has felt the need to work hard to win his father’s approval and earn the father’s love. Like his younger brother, there was something missing in his life in spite of the fact that his father loved him greatly. Somehow, both sons could not receive this great love that they were desiring. While the younger son left home in search of this elusive prize that he thought would fulfil him, the elder son sought the same thing by remaining at home and fulfilling every expectation that he imagines his father has of him. For years on end he sacrifices himself and what he prefers to do for what he believes his father expects him to do. All his life he has put his father’s interest above his own, so much so that he may have even suppressed his own needs in order to do his father proud. When the younger brother left home, the elder brother was probably saddled with his share of labour too. On top of that, seeing the sorrow that the father must have felt, the elder son might have felt an even greater burden to bring the father some happiness by not letting him down. He may even be terrified of disappointing his father and thus takes great pride in being dutiful and responsible. How would he have felt, when after all this time of striving, he sees the way the father welcomes the younger brother home? Perhaps he has never experienced that lavishing of love that he sees the father now pouring out for the undeserving younger brother. Is it astonishing that he would feel the injustice of the situation and refuse to join in the celebration?

The reason why the elder brother is unable to welcome the prodigal younger brother home is obvious. Although he has been physically with the father all this time, he had never personally experienced the unconditional love of the father. Perhaps he has been so careful about not taking a wrong step that he had never had the chance to discover that his father’s love was never conditional on his performance.  The fact is that somehow, the fullness of the father’s love was never received as such by him. Not only does he have a distorted image of his father, he has a distorted image of himself as righteous and deserving instead of being a deeply beloved, imperfect sinner. He has no interior freedom and no joy in his life because he dare not live from his desires. He does not know who he is because he has become a slave to who he thinks others want him to be. Is that not pitiful?

Yes, our parishes are full of elder sons. Many of them are the very ones who are active in our ministries. They continue to say ‘yes’ to requests for help when they are burning out. They sacrifice their family time in order to serve in the parish. They give up their leisure and rest to do even more work for God and Church. And then they get reprimanded about not being compassionate enough to the very brothers and sisters who are never around to help. They are told that they must work even harder because there are so many prodigals out there that must be found. In the meantime, their own interior lives are falling apart and resentment is growing. Is it surprising that so many of these elder brothers have secret double-lives? They dare not sin in public, but they do so in the secrecy of their homes or lives outside of church. And is it surprising that when a misunderstanding happens in church and they feel that the priest has taken the side of the other party and left them high and dry, that they simply leave the church?

Before the New Evangelisation can reach the prodigal sons at the periphery, it must first reach the elder sons who are present in our parish communities. We cannot expect anyone to extend the mercy and love of God unless they have profoundly experienced and been transformed by it themselves. So let us expect less of them – they are already overburdened and distorted by expectations. Instead, let us – to the extent that we have ourselves received God’s love – LOVE THEM and pray for their healing and restoration to sonship!